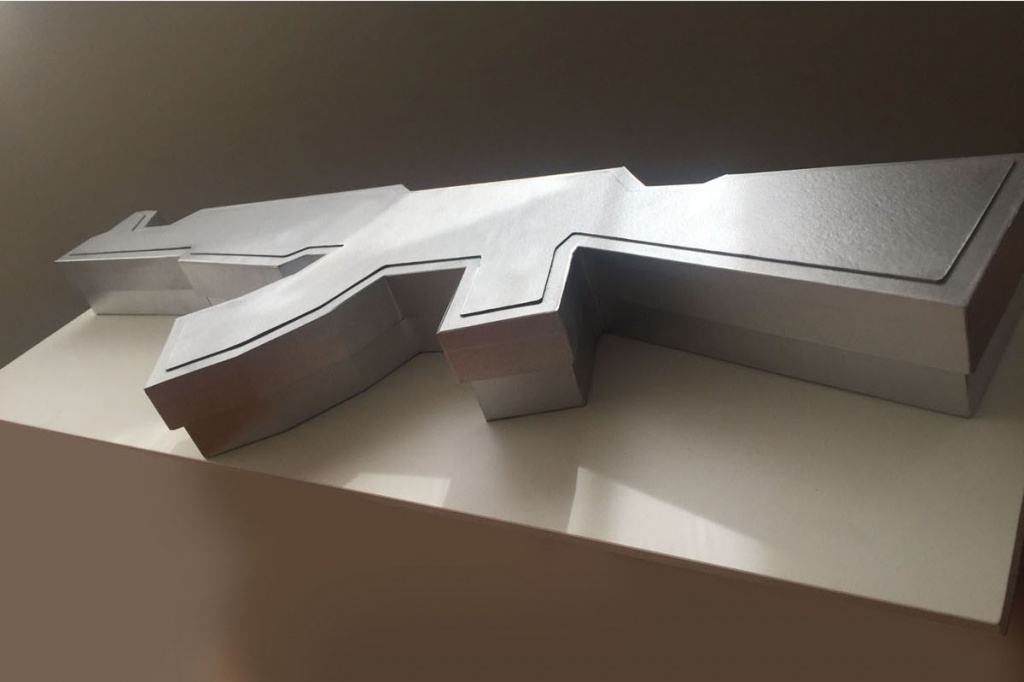 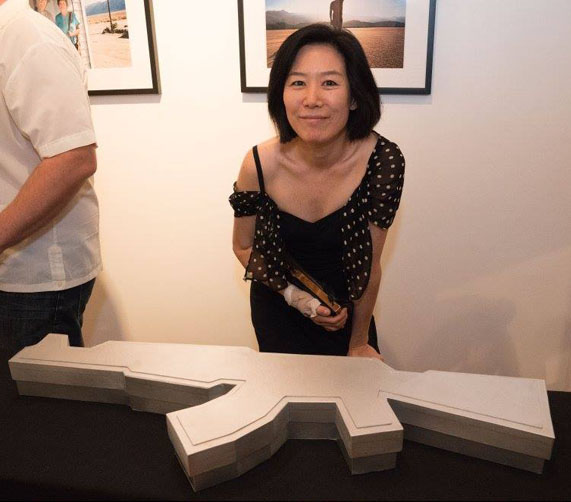 The empty box mimicking the shape of an AK-47 is meant to be a gift to America. The detail suggesting that of a coffin aspires to bring back the assault rifle ban that Bill Clinton had already passed in 1994, which expired in 2004 under George W. Bush.

This hand-made box, immediately recognizable as an AK-47, (the most famous rifle ubiquitously copied and produced around the world), while calling for an assault weapon ban, celebrates the popularity, effectiveness and elegance of design of the rifle; The designer Mikhail Kalashnikov intended it solely for military use as there is no reason for any civilians needing a 30 (or higher) round magazine semi-automatic weapons to protect him/herself or hunt animals. The empty box also denotes this particular rifle being illegal to be sold in the US since Obama’s ban on Russian made guns since 2009, although the sales of assault rifle of our own, AR-15, and AR-16 went up exponentially to replace the AK-47. (via NRA’s incessant scare tactic to up the gun sales by fueling the paranoia of gun owners whether it’s the mass shootings, or ban on an assault weapon, that “Obama’s going to take away our guns”).

The gun laws we presently have in our country allowing sales of semi-automatic assault rifles (all the variations designed after AK-47 – there are hundreds), lobbied by NRA whose sole aim is to make money at the expense of thousands of American lives, is not only irresponsible, but nonsensical in a civil society like ours – we don’t live in a totalitarian government, where there is 0% chance of threat of an army coming after an individual that one would need to fire 30-100 rounds without reloading for retaliation. These assault weapons are the choice of the psychopaths that took away innocent lives, kids, teachers. Perhaps this seemingly innocuous box can trigger(pun intended) an active participation in getting our congress to once and for all ban all assault weapon sales from civilians, plus implement a much stronger background checks to buy guns. The box is painted in silver, as in silver bullets, and “l’argent (in French), as a symbol of money since the old testament, for the only reason for our laws permitting these types of weapons sales to civilians is “money”.

For more info on assault weapon ban, here’s the LINK !