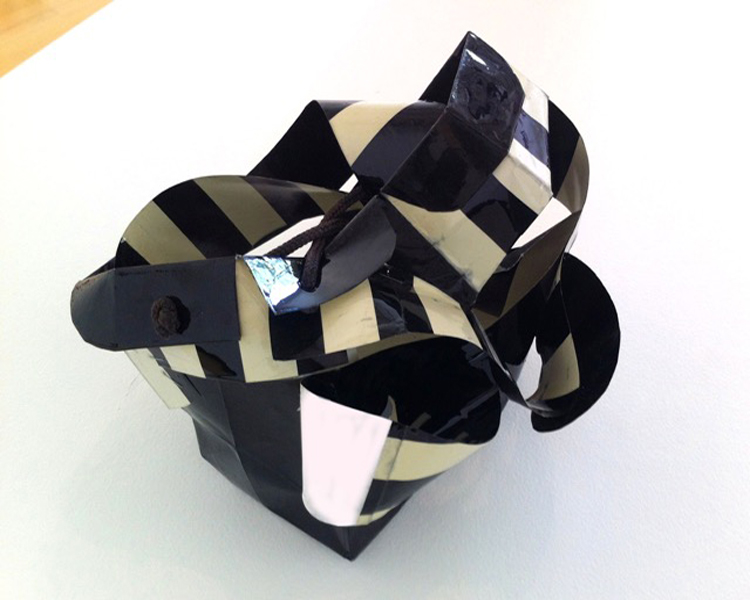 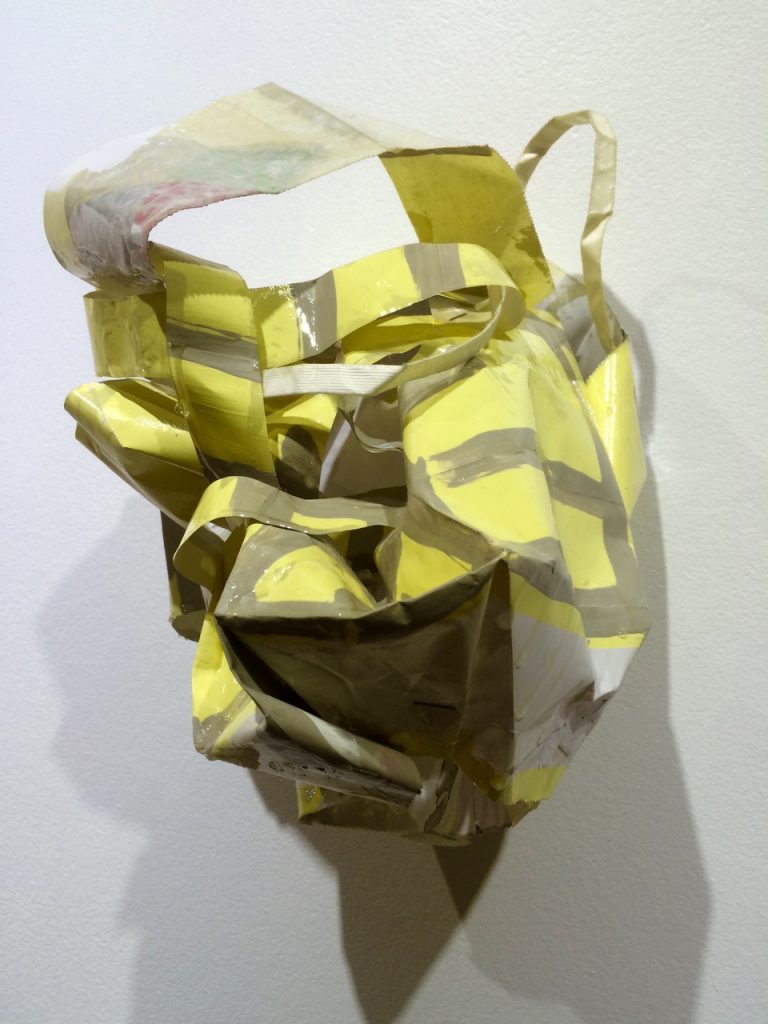 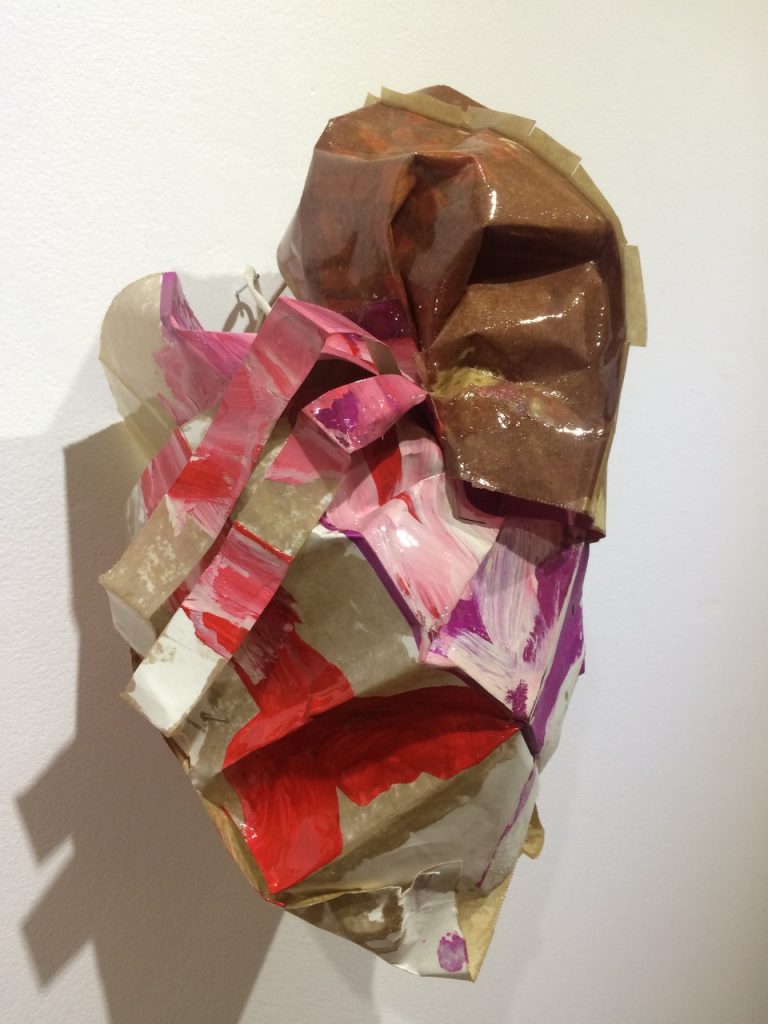 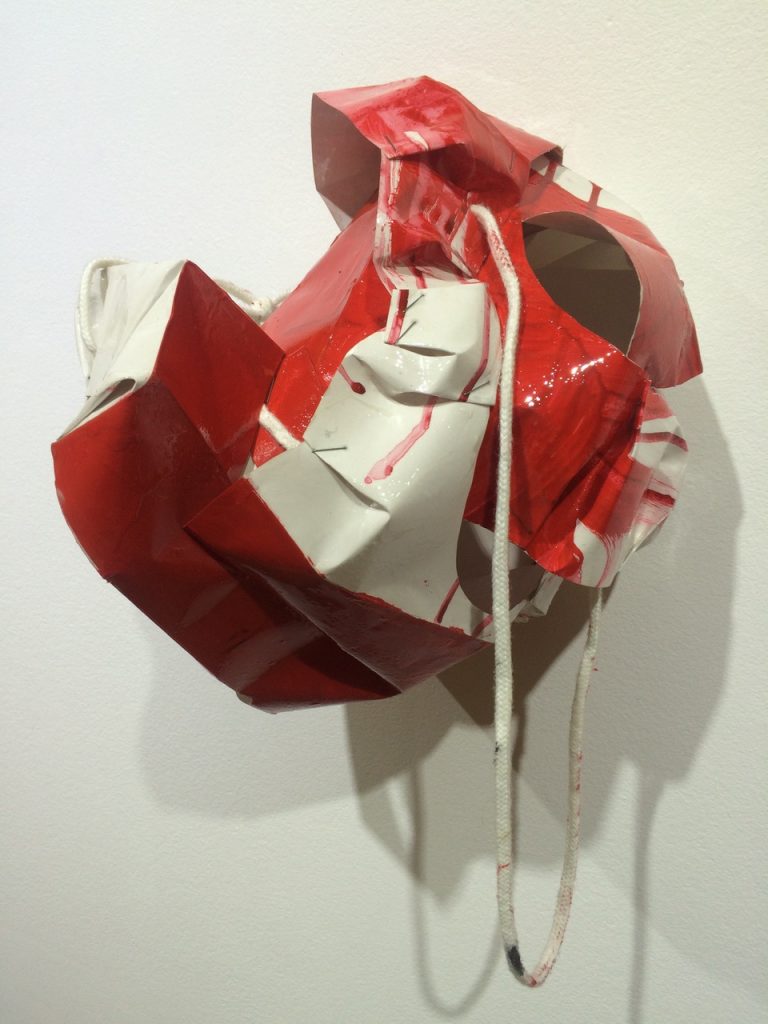 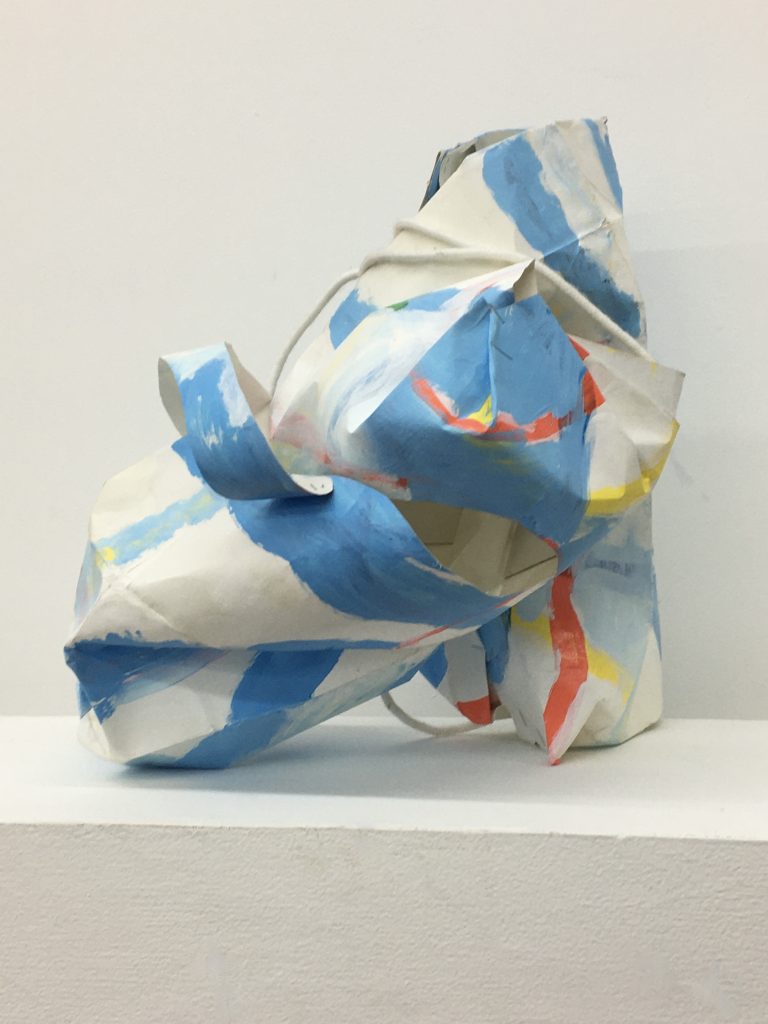 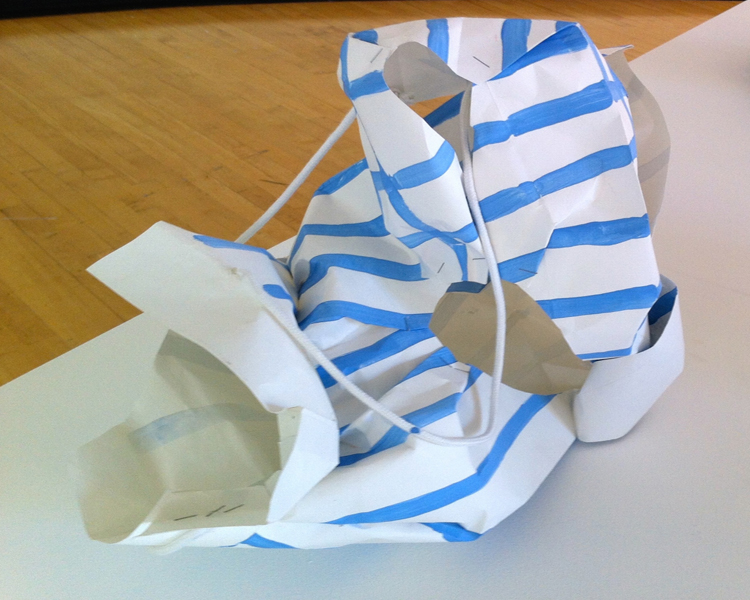 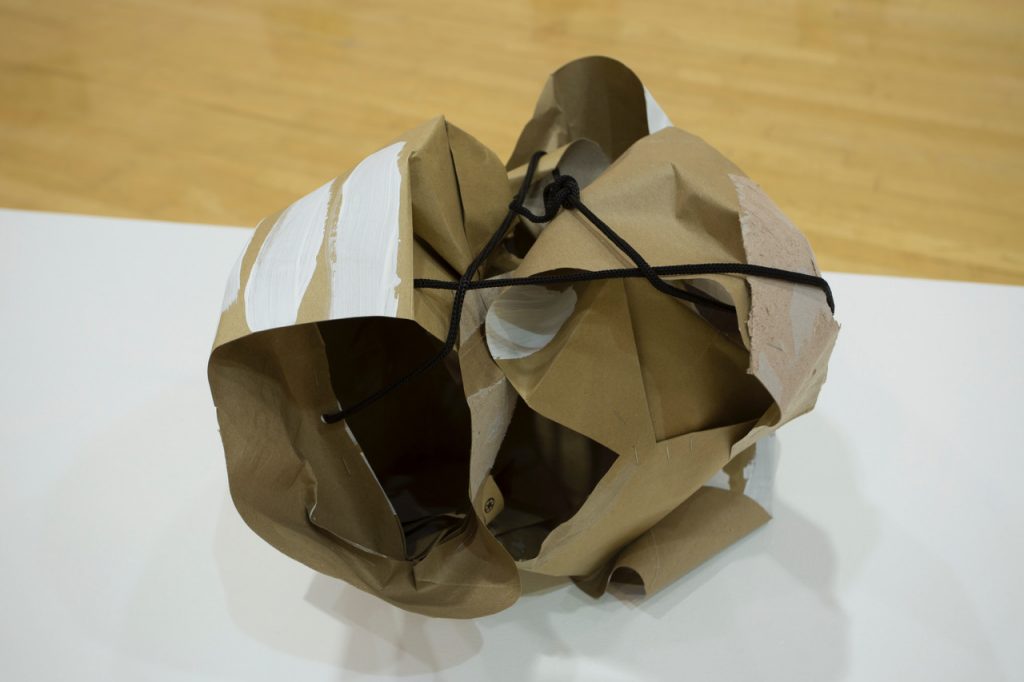 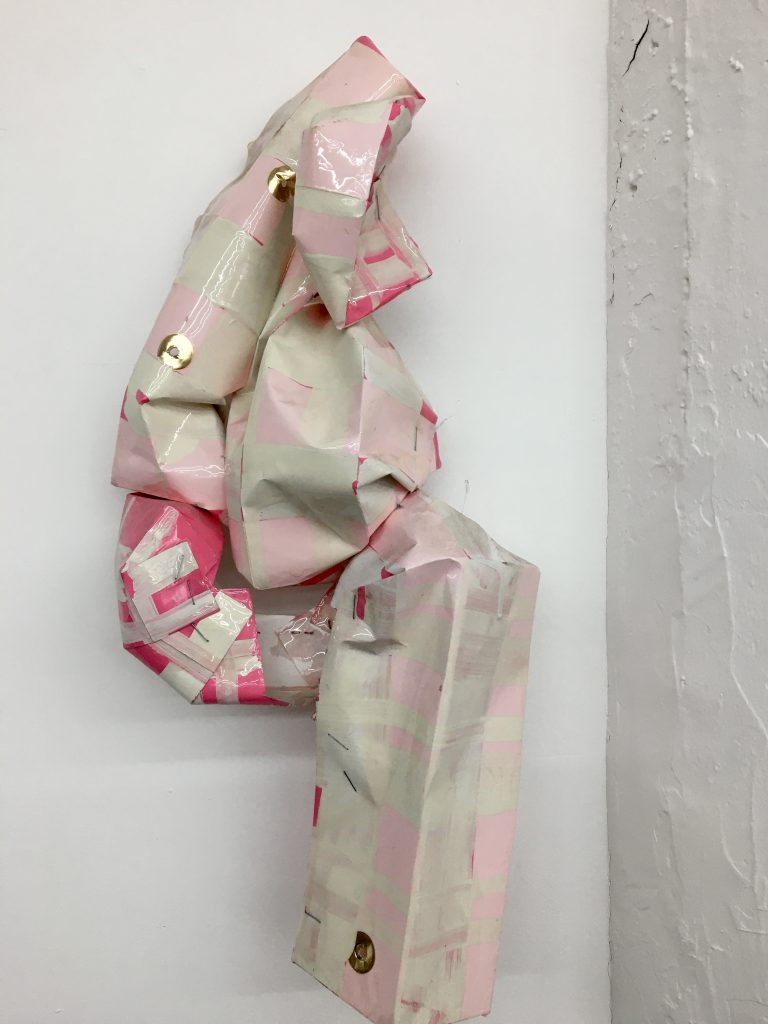 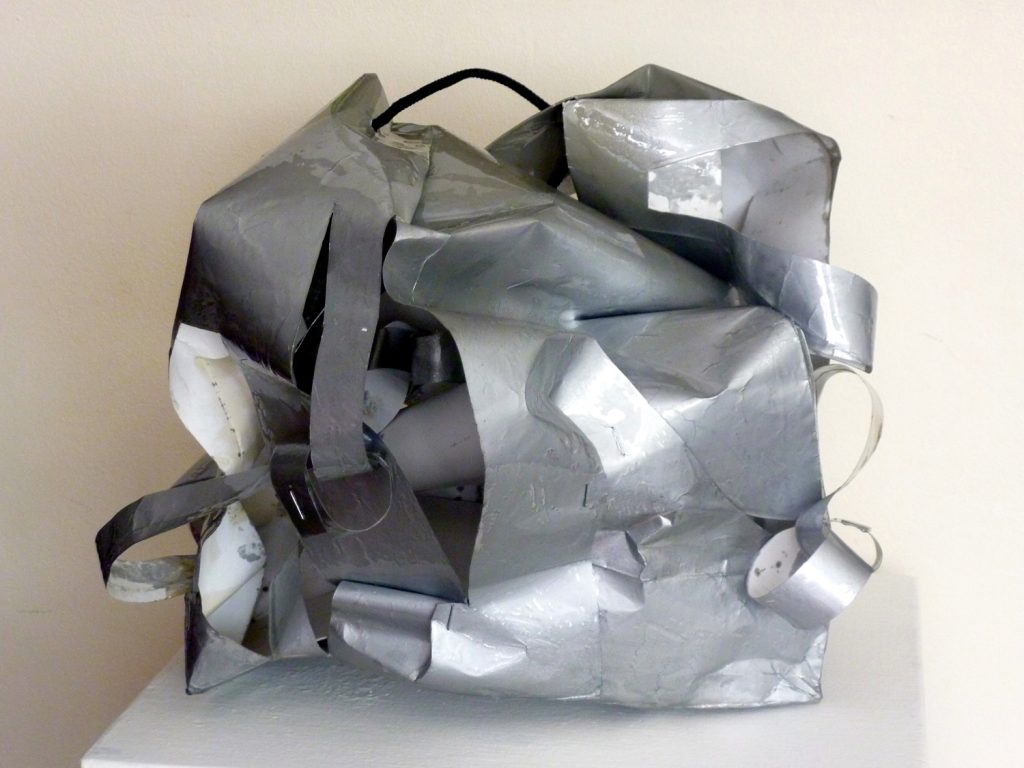 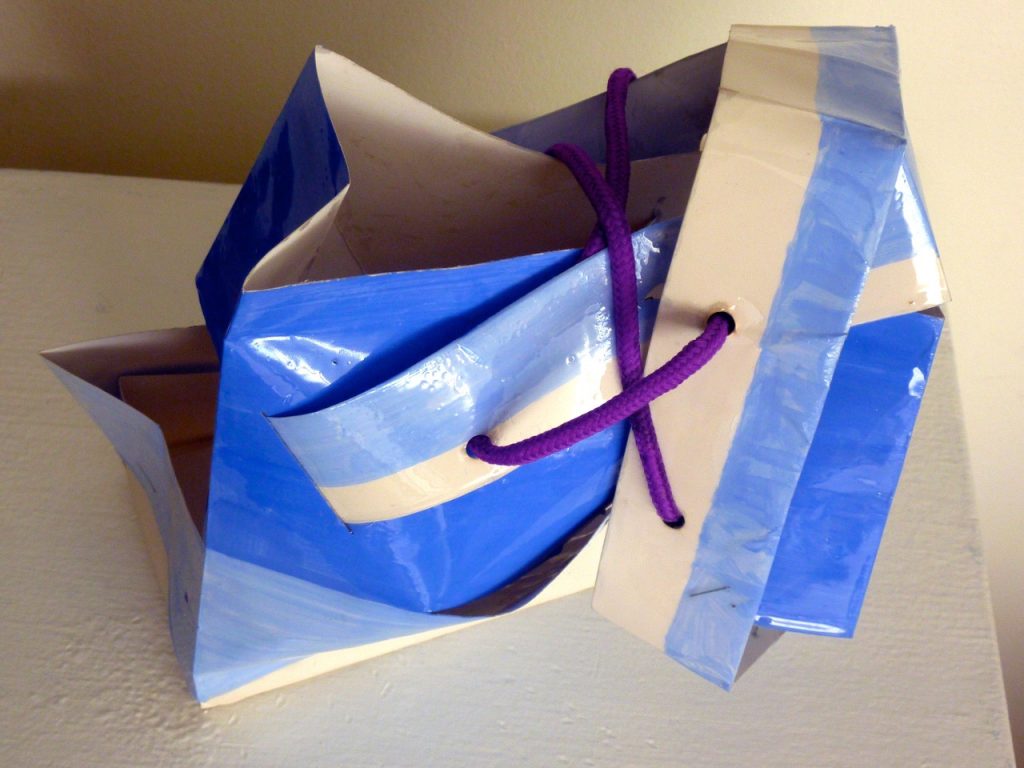 No Logo Blue, 2015 Acrylic paint and epoxy-resin on paperbag 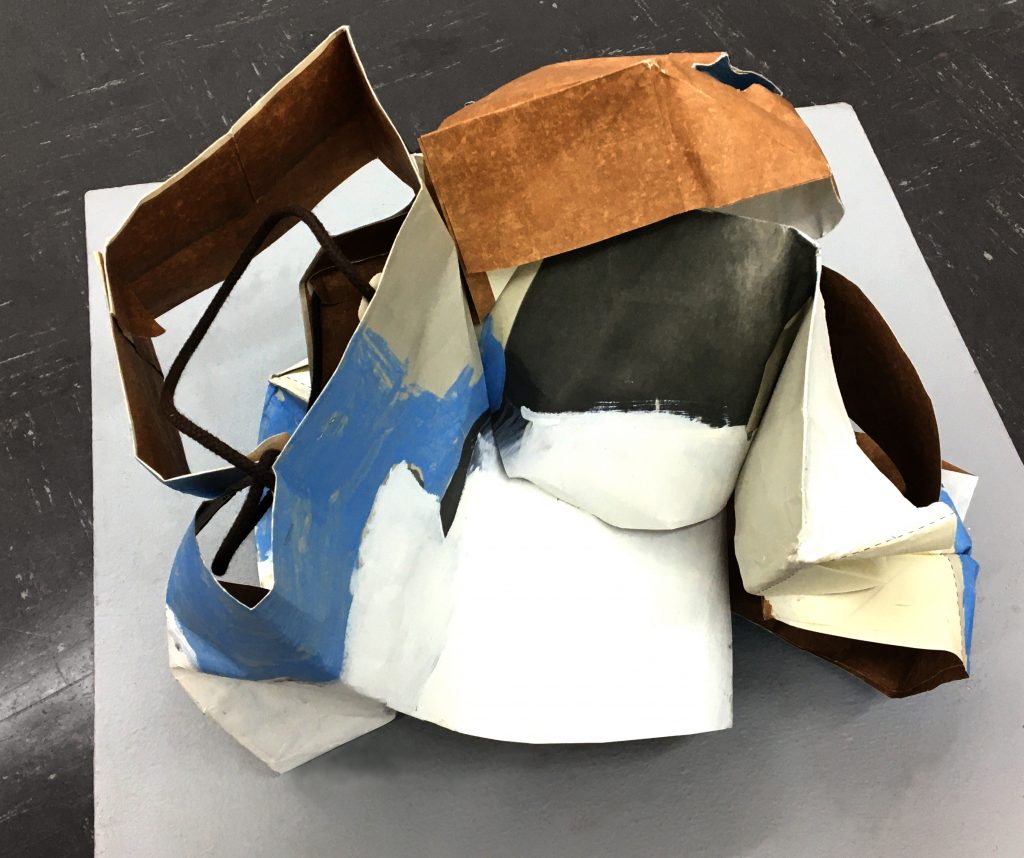 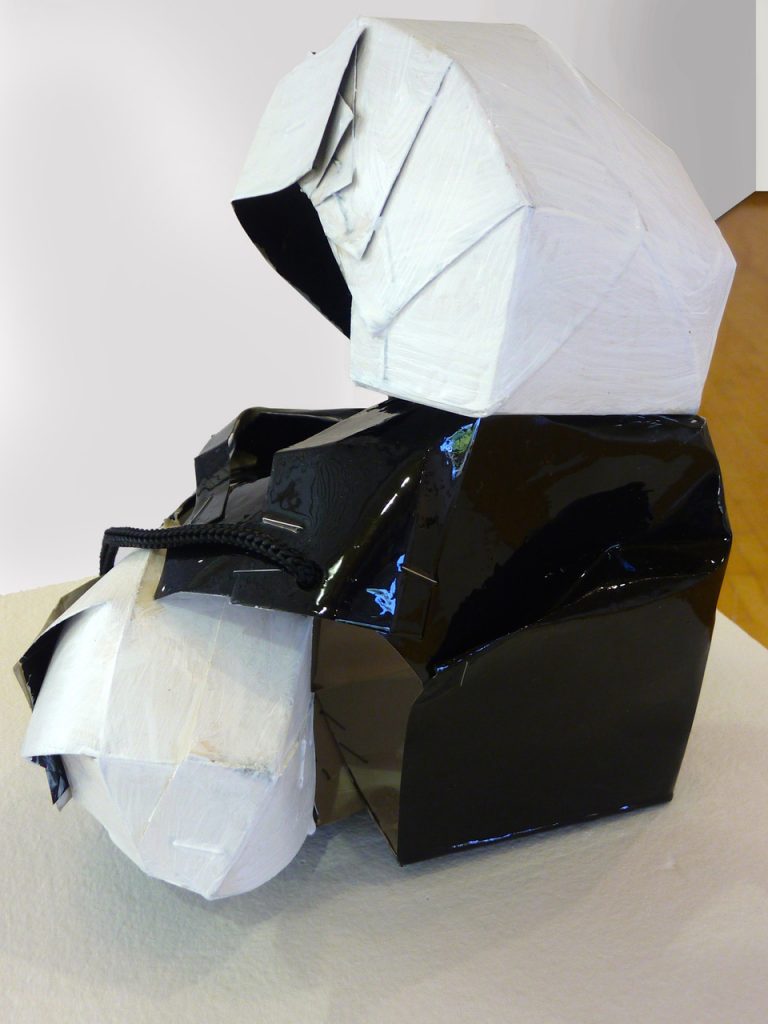 Taking from Naomi Klein’s No Logo: Taking Aim at the Brand Bullies, a book published in 1999, (in which Klein addresses the effects of “super brands”; Nike, McDonalds, Shell, Microsoft, etc. and these large corporations taking out competitors with their size, lawyers, contractors and advertising agencies resulting in four major Nos:  “No Space”, “No Choice”, “No Jobs”, and “No Logo”for they contract out all their labor in 3rd world countries doing away with factory for production), I composed the exhibition in a form of a “runway fashion show, Prêt-à-porter ” naming the brand “No Logo”, where an array of sculptures made of shopping bags, mimic the catwalk of models on a runway show each expressing unique character and form.

Having been a shoe designer in my early career, incorporating my knowledge in the design industry as a point of departure was natural. The deconstruction of the used shopping bags into each unique forms purportedly address the lack of individuality in the global market; lacking in true variety of designs and tastes, functionality, and life style concepts. Exploiting the inherent properties of a paper made container with 6 sided box-like shape much resembling a basic architectural structure, that’s also a vessel that’s malleable and behaves a bit like fabric, allowed me the discourse of blurring of inside and outside. The bags, while being “permanent disposables”, they also communicate “movement”, and the transience of an object’s life- mimicking the models walking swiftly past you, giving barely time to grasp details of their outfits, quite fittingly speaks to the expected duration of the collection.

My more ambitious attempt in expanding capacities of paper made bags, is to make my plug for “individuality” (not in the American Libertarian sense – that tends to promote laisser faire selfishness, but more in line with romanticism or the existentialists’ “the undisputed origin or authorship” sense) not only in our market place, but in our society at large: to what degree is the institutions and governments (power structures)’ control of the public responsible for suppressed individuality as Michel Foucault was concerned (in Madness and Civilization, Discipline and Punish, and History of Sexuality); and how much of this problem can we attribute to the misguided capitalism, globalism and profit driven society as Karl Marx anticipated (inferring from Communist Manifesto and Das Capital)?; And how much of it would be the media’s fault, as Noam Chomsky focused on the blame (in Manufacturing Consent: The Political Economy of the Mass Media), brain washing the public by serving solely the big corporations’ interests?  And what percentage would our conformity and desire to be like everyone else be due to our human nature?

For No Logo Part ll Click the link below: