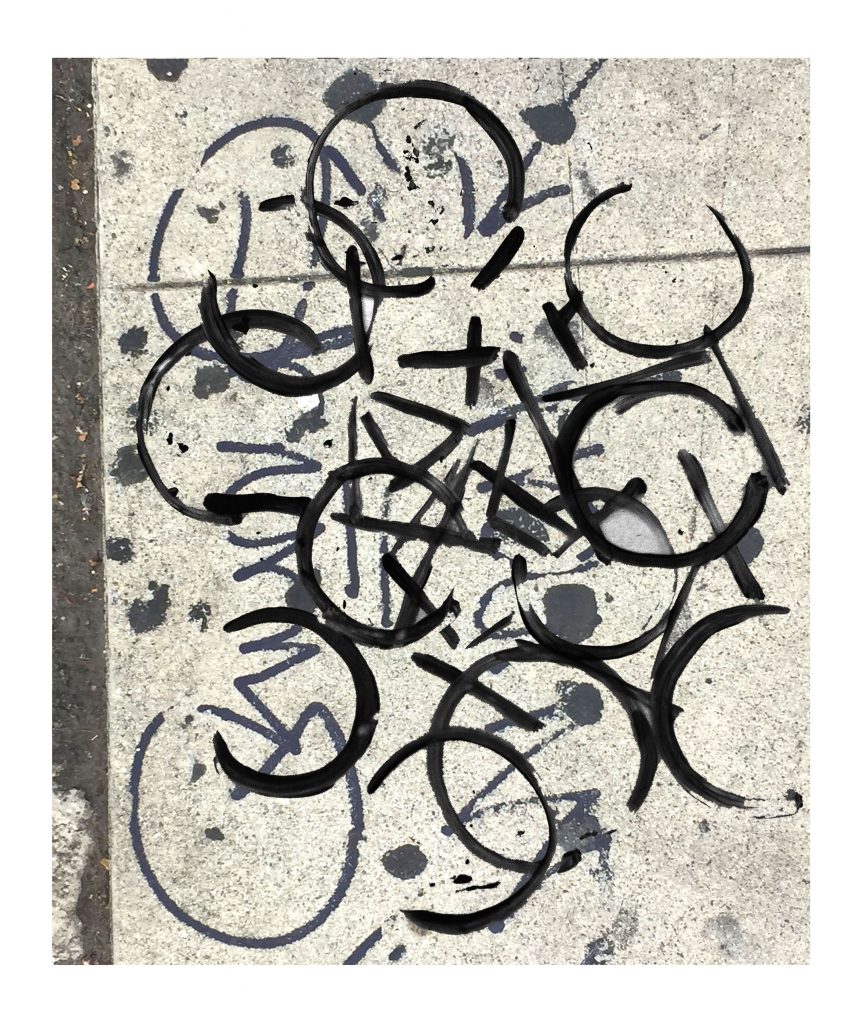 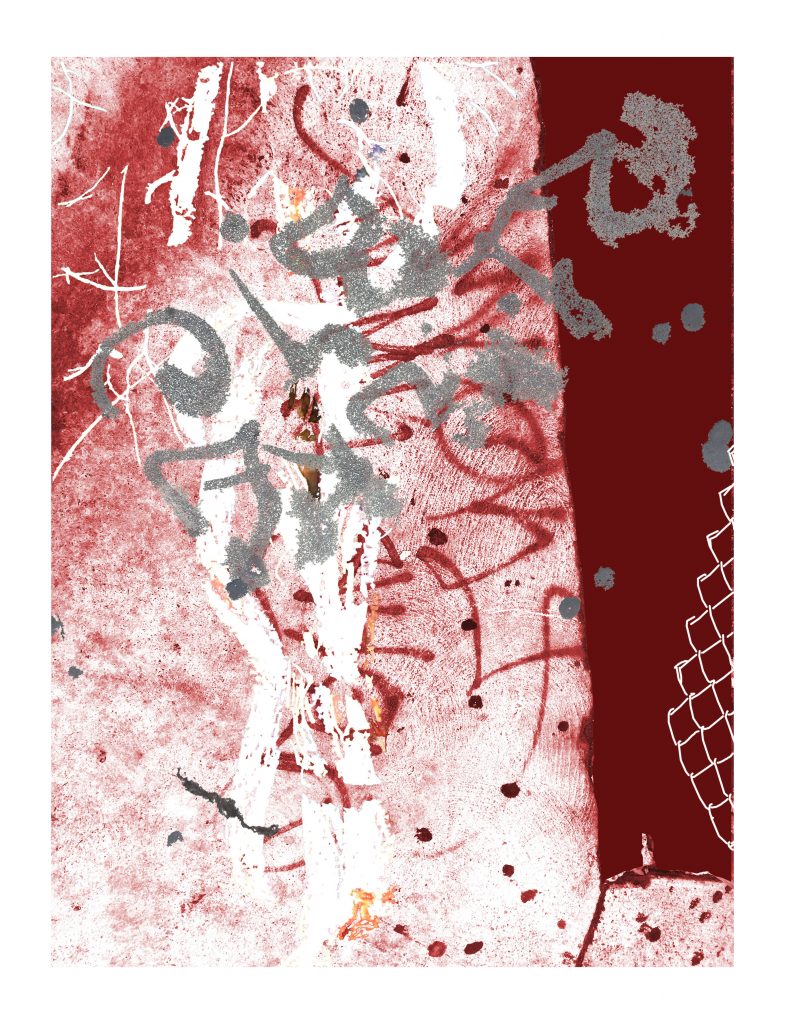 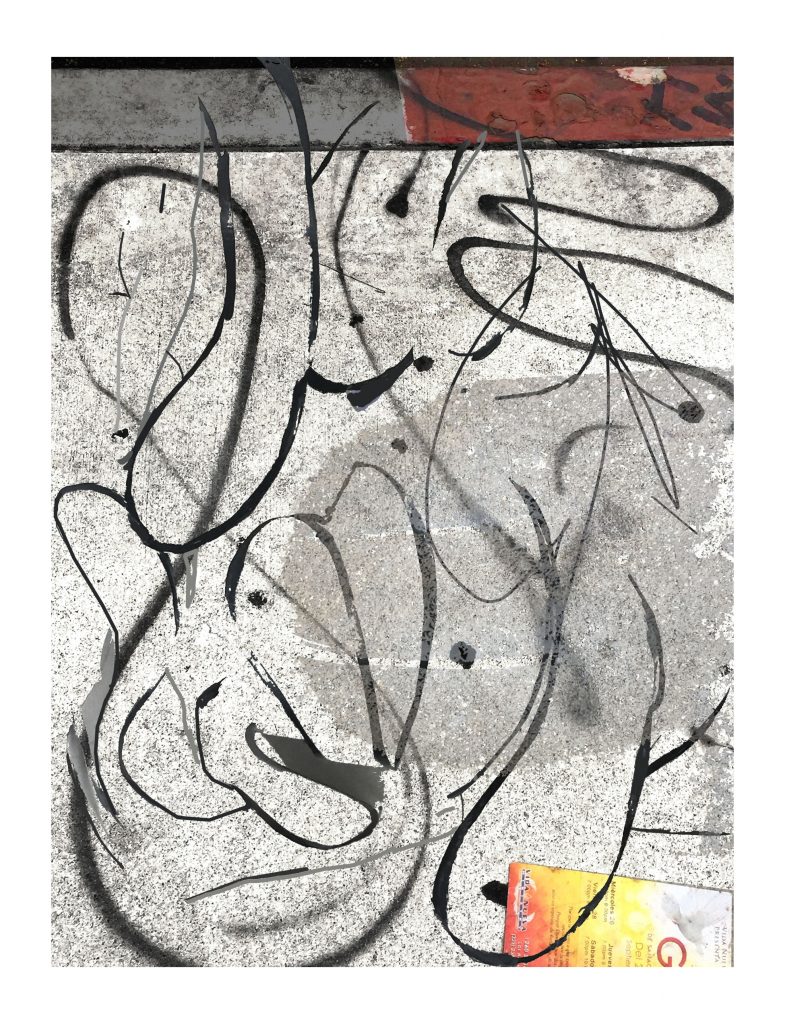 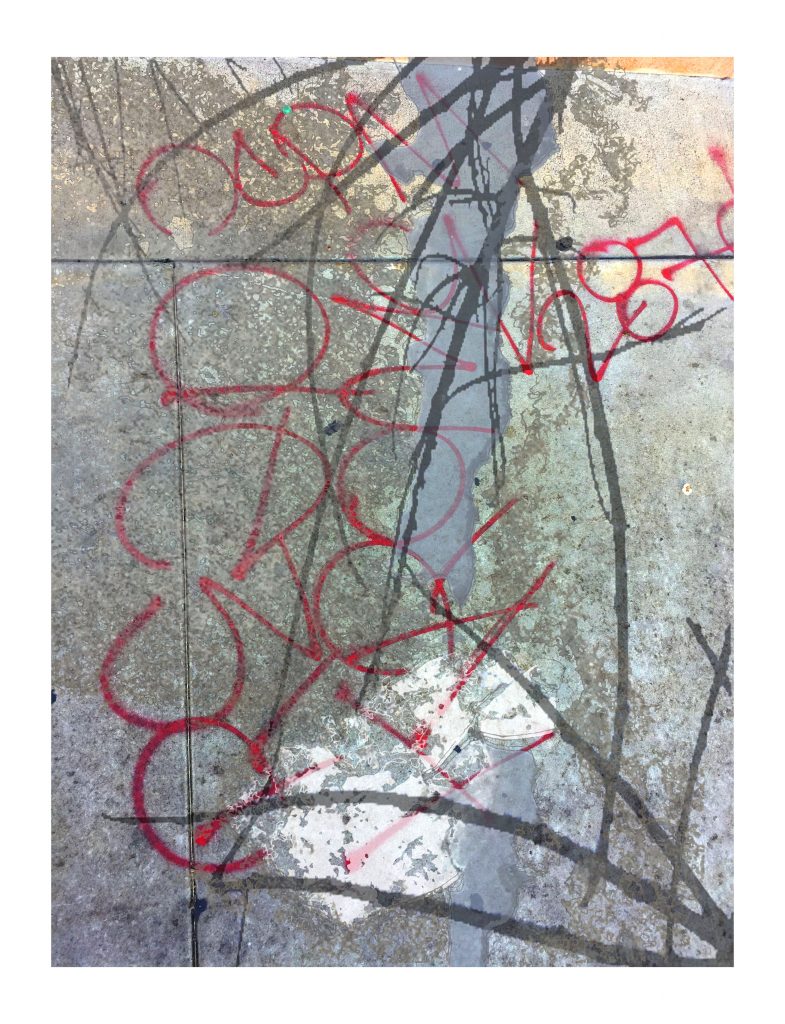 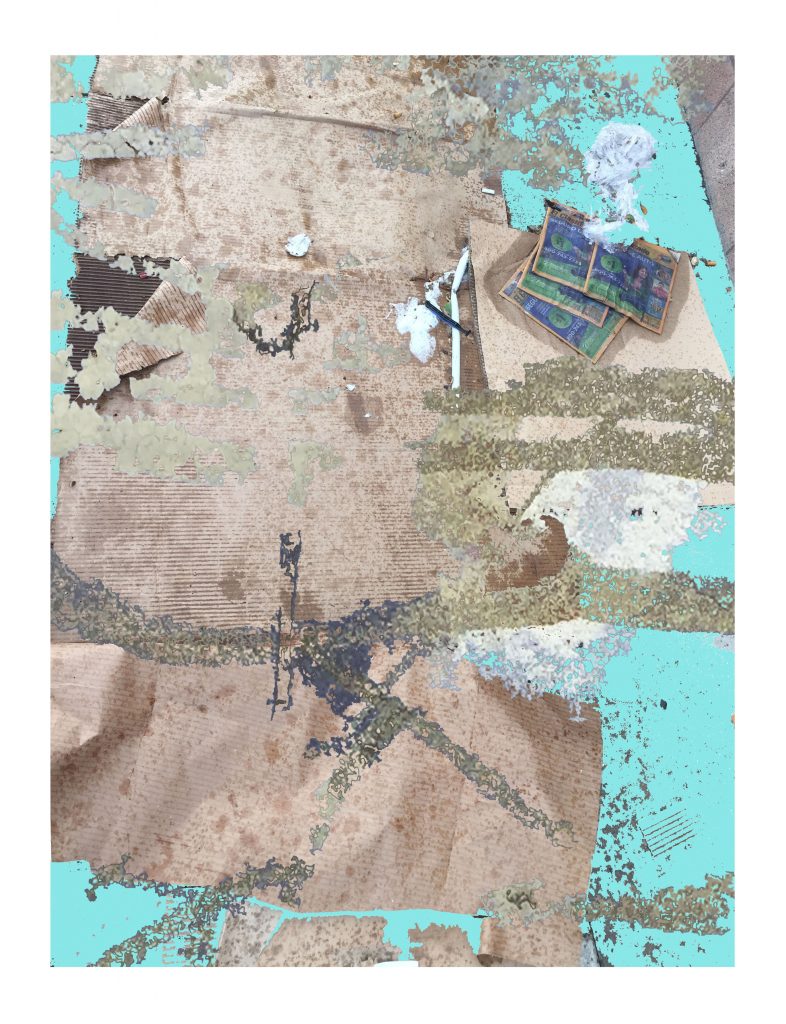 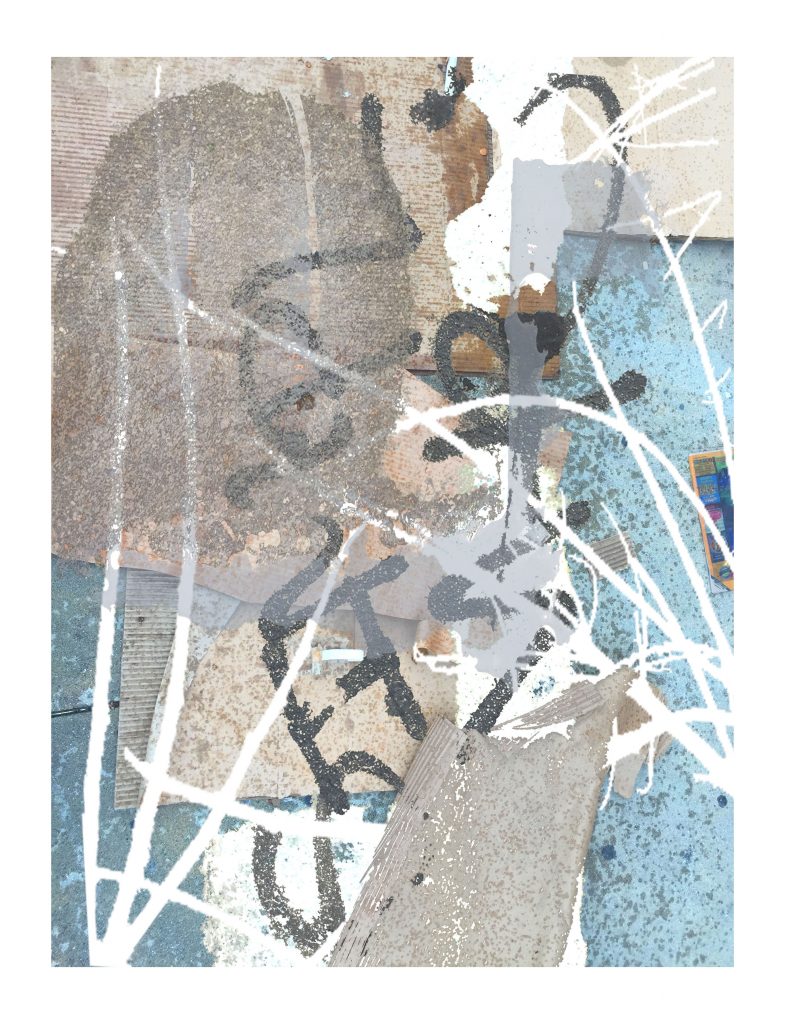 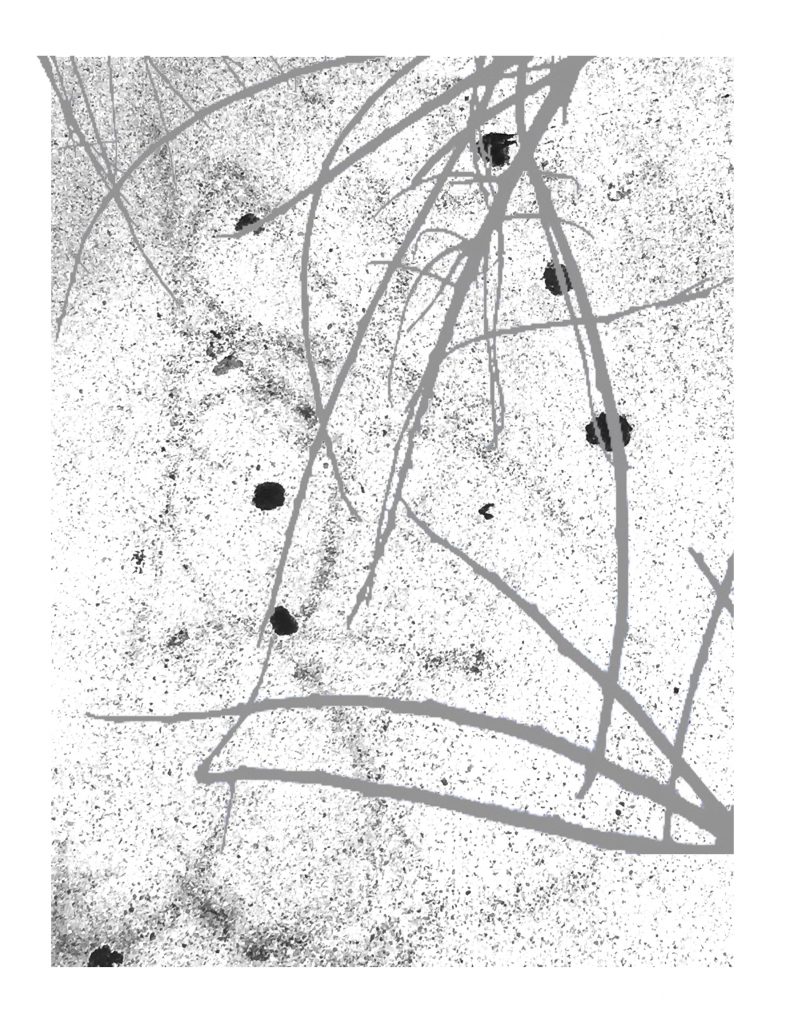 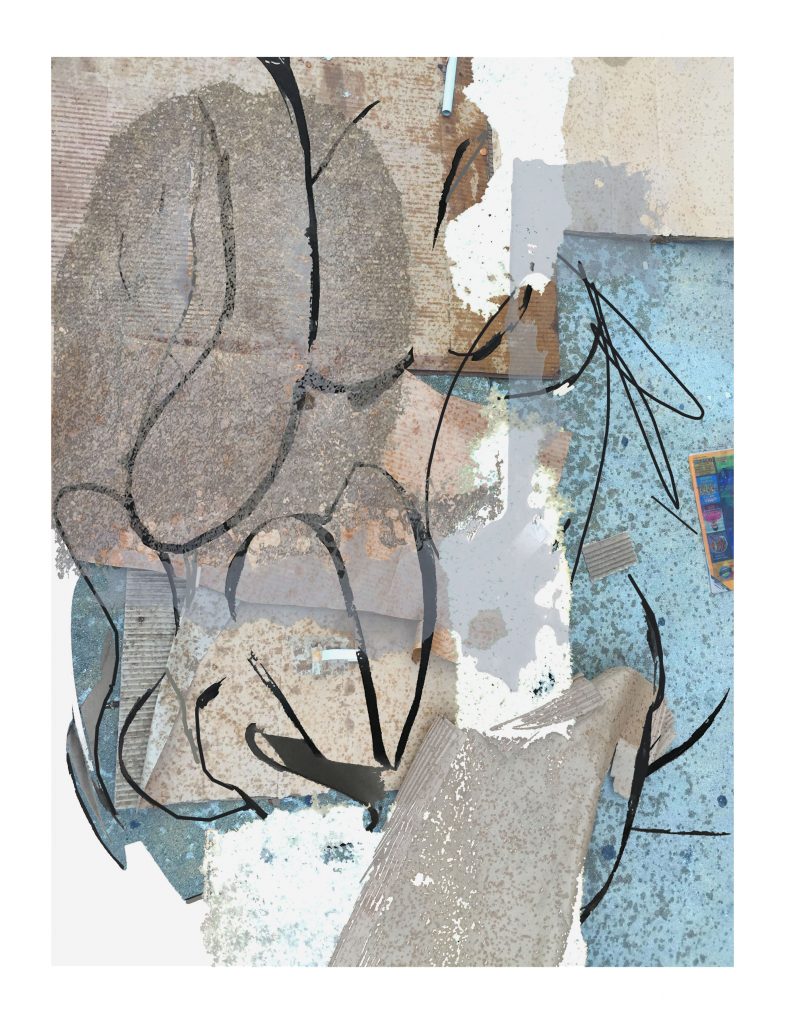 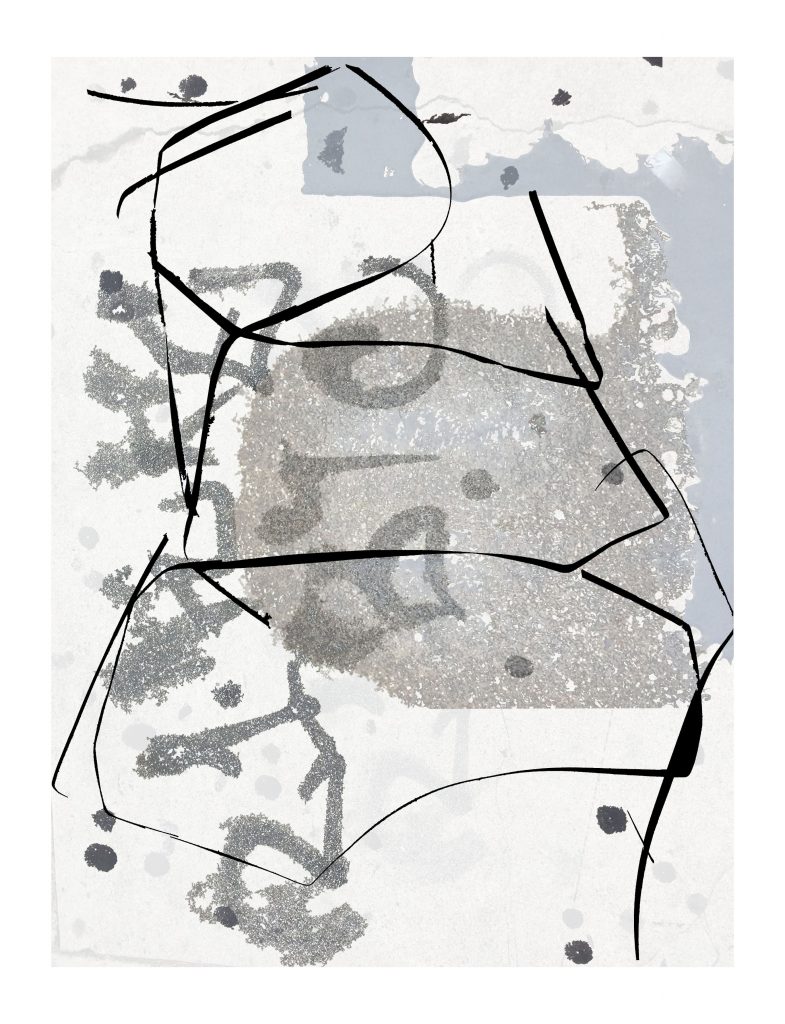 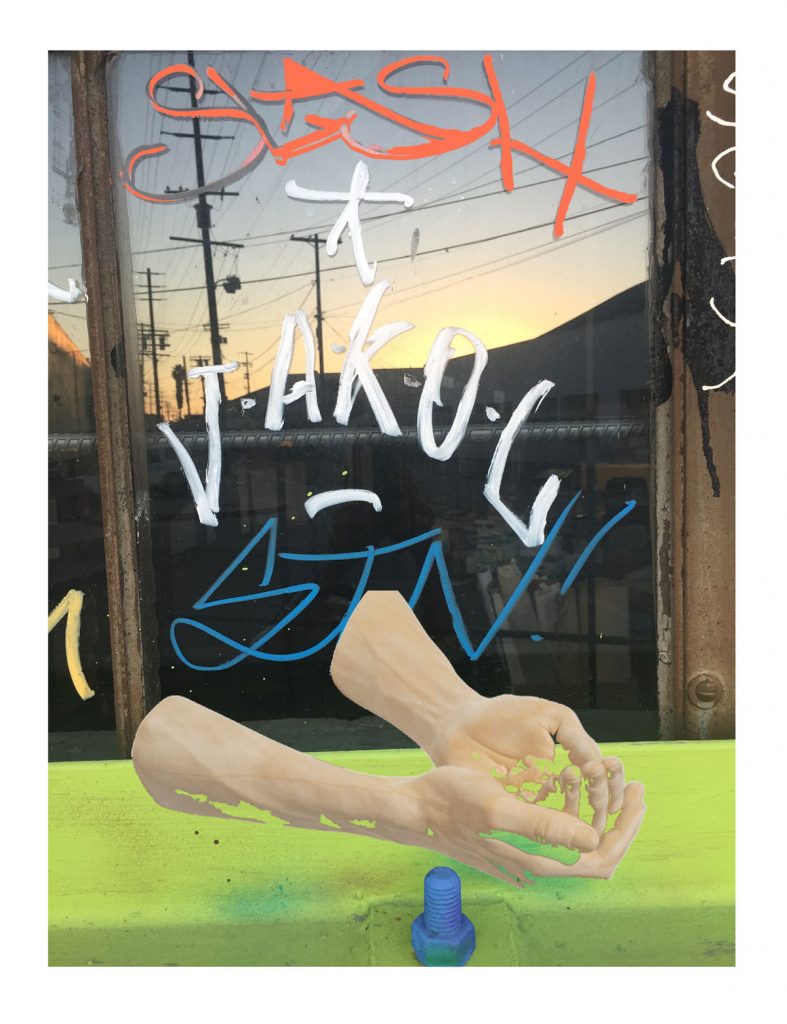 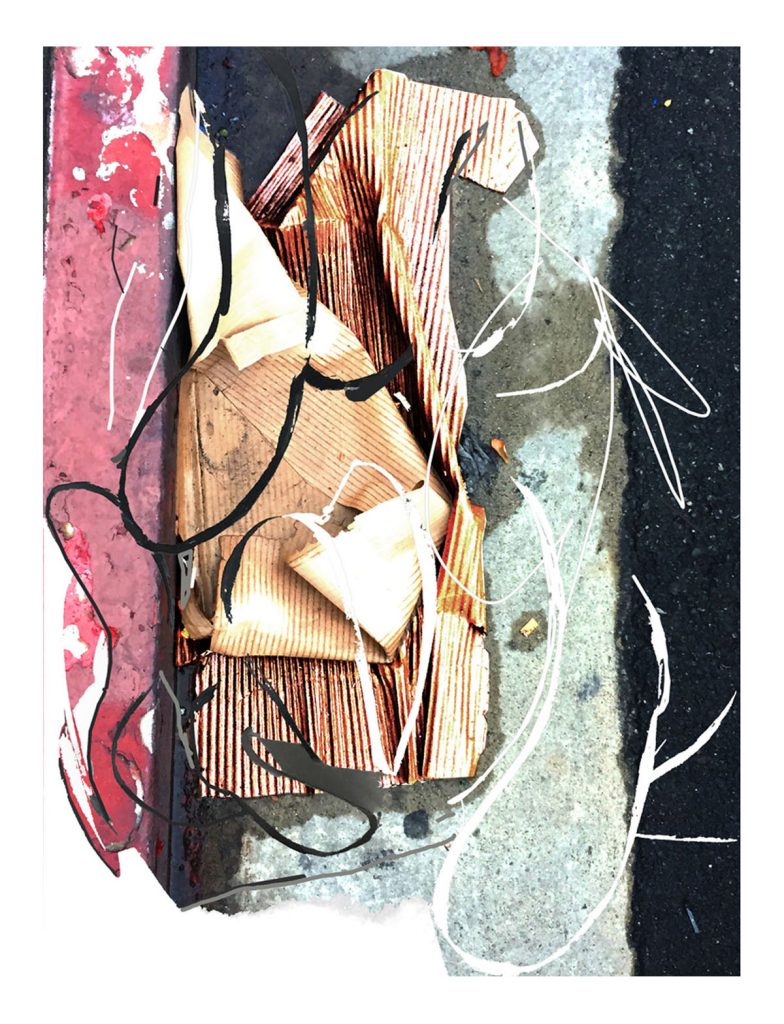 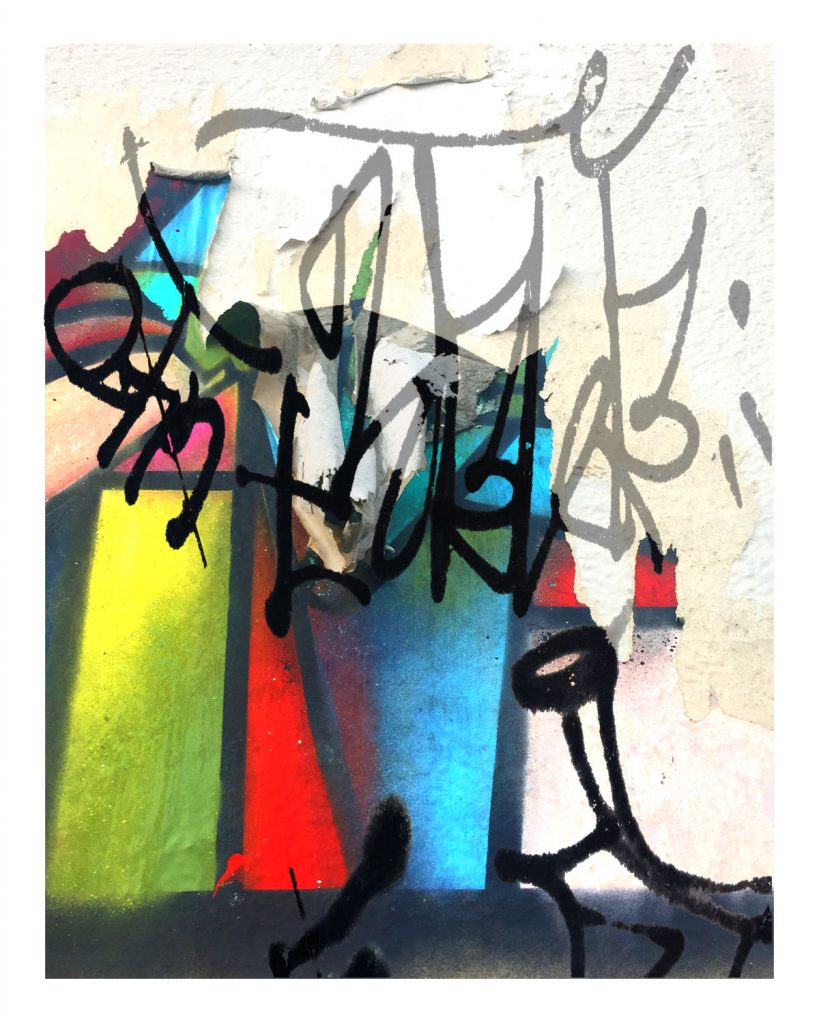 This work is a synthesis of found images, taken from the streets that I personally experienced daily since moving into Downtown roughly 9 years ago. Separated by a two mile stretch of skid row, and perhaps income level, the gritty industrial vs high-end retail atmosphere are synthesized and interfused with my studio work. Hybridizing the images from the sidewalk, the photographing of just what appears before my feet; Anything from trash, shadows, to the local graffiti images mostly taken from the pavements, I’m continuing my interest in leveling the disparity and separations we experience daily without noticing. Oddly my improvised drawings (intuitive mark makings often without literal meaning) seem to share with the local graffiti marks some attributes; spontaneity and speed accompanied by some intention; then the blending and stratifying with no particular order of the two different spontaneous acts from at least two different participants (although unwittingly by at least one party) as an amalgamation of marks purport to be simulating one voice. It’s about desiring a connection with other street sharers (who maybe artistic but unschooled, or who may just want to dirty up the sidewalks with whatever crosses their minds at the time), as well, making a connection to art making as a practice that is inherently dependent on the nature (or the environment, the landscape, the culture) with which the artist crosses paths.

Perhaps futile, but it’s an attempt to break the wall of hierarchy between the mid downtown Los Angeles, where my studio is located called, the Fashion District, (somewhat ironically, as it’s quite out of fashion for the area has been occupied by jobbers and discount outlets for mostly immigrants for decades, whereas the Arts District, two miles east, is highly commercialized and equally ironically named as the recent gentrification has been moving the artists out of the area. The stark contrast of the two zones separated by the two miles of skid row and homeless tents couldn’t be more noticeable in just daily few blocks of walk from the car to the studio; One of the two zones is completely neglected, with no street cleaning for weeks at times, I suppose one can guess which of the two. One would think that as tax paying citizens, all of us at every zone would deserve the same attention from the city.
The point was, I wanted to include the much derided graffiti or other stains on the pavements (the neglect by the city in a sense) in the discourse of art (their seemingly purposelessness with consciously contrived purposelessness one might say- also the marks made by graffitists are more likely to have purpose as they are messages, at least for their designated viewers; whose purpose or purposelessness is more worthy is quite debatable between a commercial artist or a graffiti artist who maybe expressing some sort of anarchist disdain for the society- which all of us can relate to at some level.