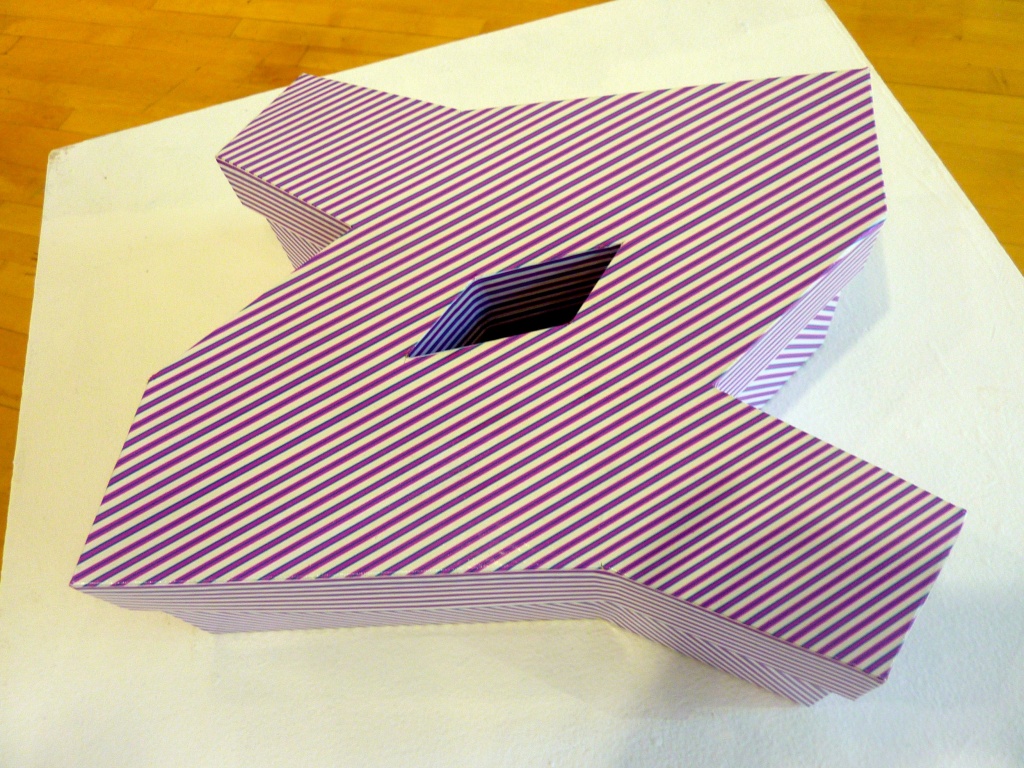 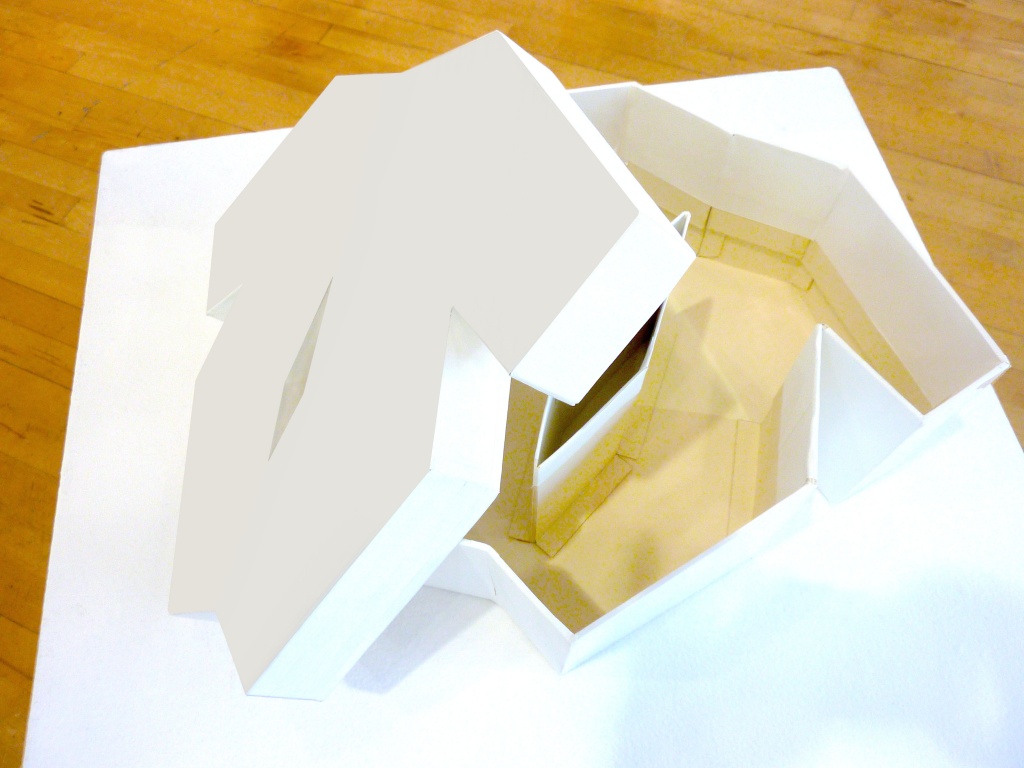 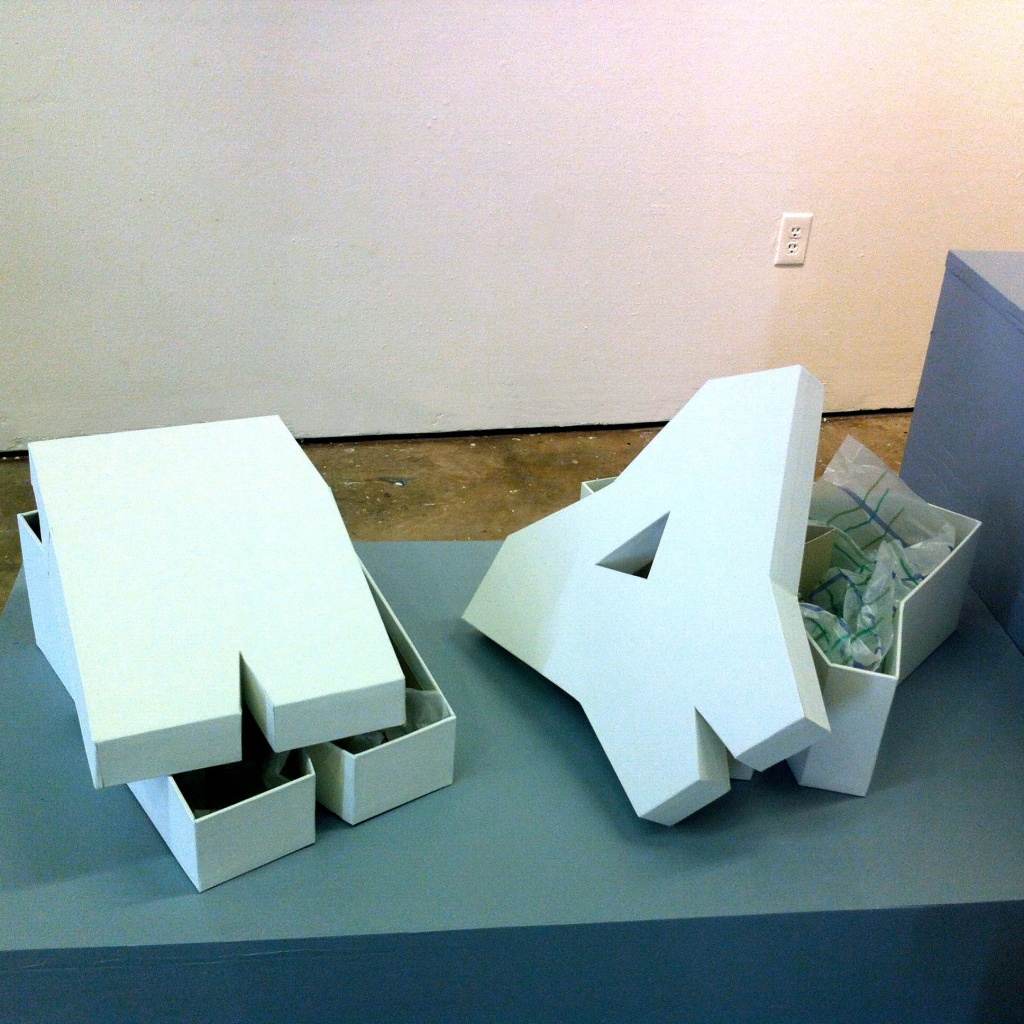 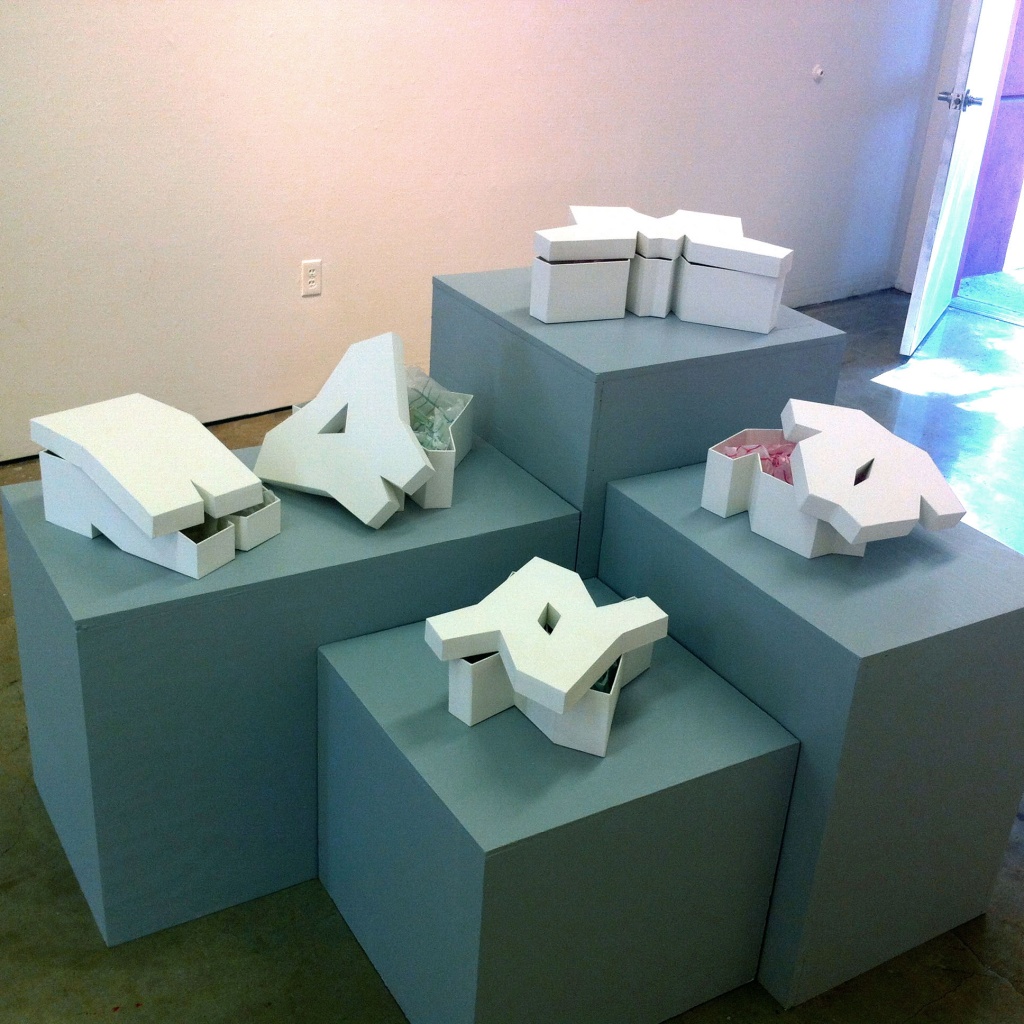 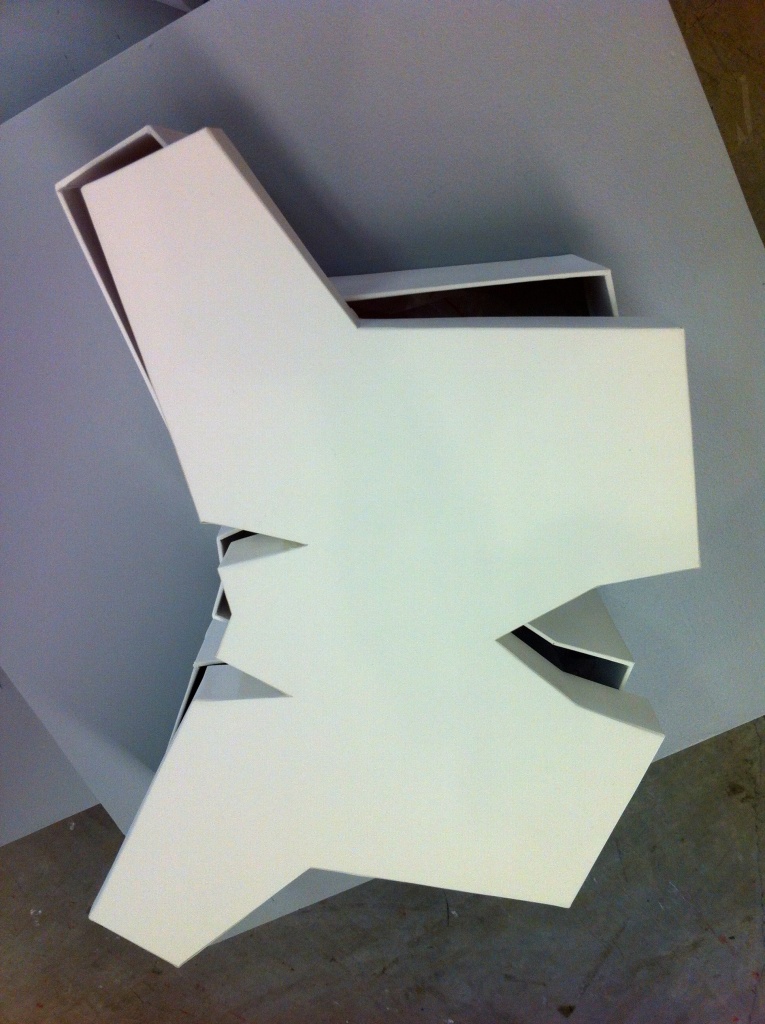 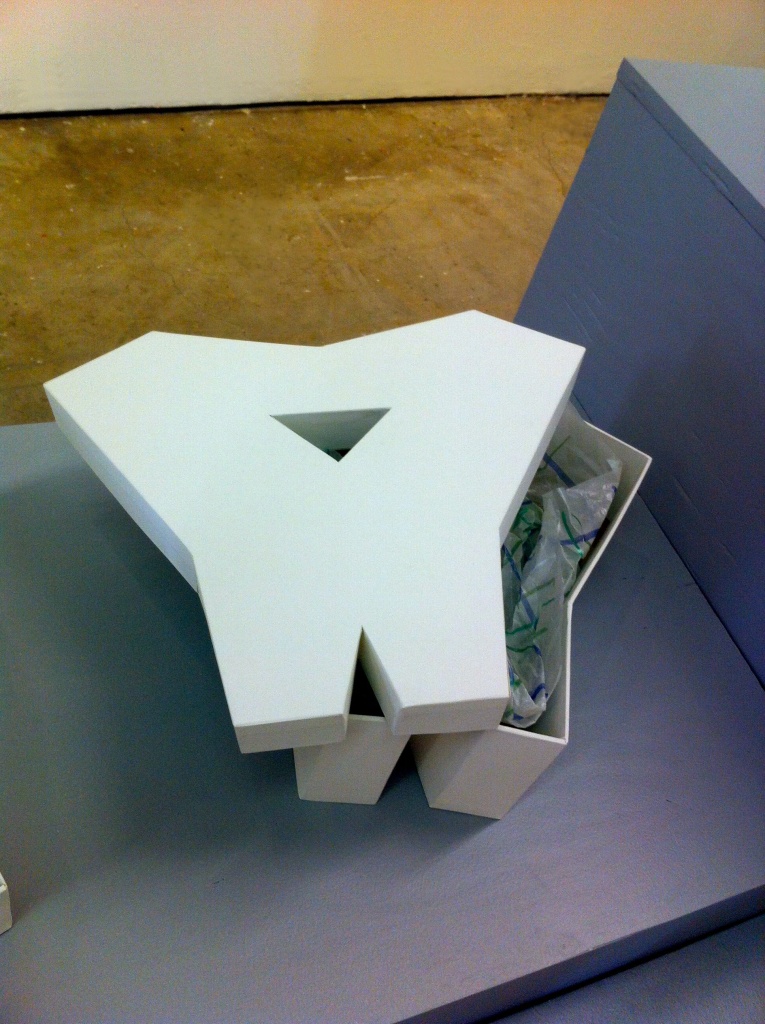 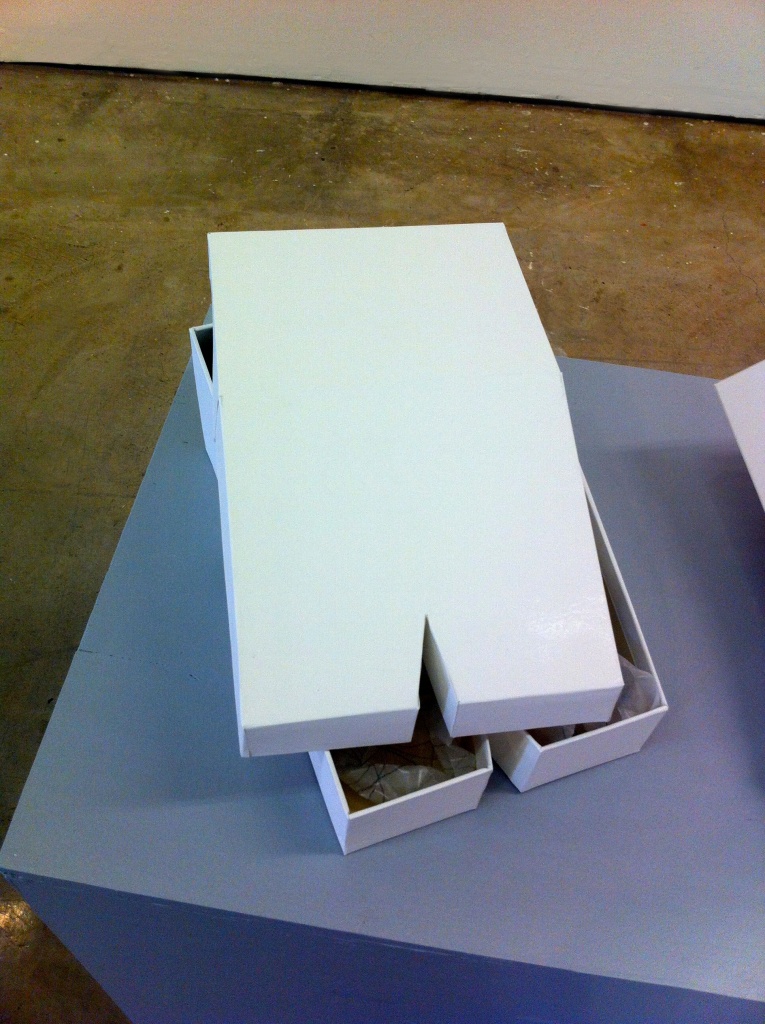 Designare, Intentio, Planum, a solo show in 2015, at Wedge Gallery at Woodbury University, Chung takes the three words in Latin, “Designare”, to designate: to officially choose (someone or something) to do or be something : to officially give a particular role or purpose, “Intentio” : design, synonymous with intention in Latin, and, “Planum”: plan, drawing; to describe her intention in designating a purpose to “design” beyond its function”.

Three bodies of work are exhibited in boutique fashion of accessories, such as shoes and bags, except that the items displayed are only containers of such objects.

The box-like objects and shopping bag sculptures engage in a dialogue between intuition and intention outlining two different processes: one with specific, planned outcome, and the other, an intuitive process that allows whim and chance. The works ironically challenge our fixed notion of a container as merely external protection or subordinate transporting aid, not quite qualifying as an entity in itself.

The third series entitled “still life photography” undergoes both processes in the intentional search for a desired effect through the viewfinder coupled with an intuitive manipulation of the image. The end result becomes a document of sorts of the deconstructed bags’ complex forms as they blur the inside/outside feature associated with containers. The photographic image helps rediscover the object through a simple change of medium, infusing it with its own subjectivity. The abstraction produced by taking close ups and shots of the inside of the sculptures open up limitless transformation of the already transformed paper bags.

The three bodies initially made for separate exhibition, here engage in a dialogue that purports to be about fashion, and yet, defies the commercial industry by individualizing each shopping bag; and the shoe boxes, hyper-personalizing each object, contradicts the nature of mass production perpetually cutting cost-while a few giant labels cause scarcity in variety of products in the market place. The intentional and the intuitive processes juxtaposed in this exhibition, in three distinct bodies, address a common interest; the boundaries we can push in a context of “individuality”.